We are very excited to invite you to the annual Imperial College London SIAM Student Conference! You can look forward to a full day of student talks as well as exciting keynote speakers in many different fields of mathematics (PROGRAMME HERE!!!).

We have great keynote talks:

The word ‘shape’ denotes the external form, contour or outline of something. Shape is a basic physical property of objects and plays an important role in applications such as evolutionary biology or automated image understanding. Mathematically one can define a shape to be an embedded submanifold in an ambient space. The shape space is the collection of all shapes. To perform statistical inferences it is necessary to equip the shape space with additional structure, for example a distance function or a Riemannian metric. In this talk I will describe a class of Riemannian metrics that are used in shape analysis. By doing so we will see how functional analysis and differential geometry interact in infinite dimensions and that the infinite-dimensional landscape can be full of traps for the careless traveller

Simulation based on numerically solving PDEs is a core challenge in computational mathematics. This is the only field in which entire top 50 supercomputers are procured for a single class of problem. However, the productivity of simulation software creation is spectacularly poor, with the combination of application, equations, numerics, and various levels of performance engineering creating a code so complex that advances become prohibitive. PhD students frequently spend the majority of their research time re-implementing known techniques in huge legacy programmes just to reach the starting point for their research contribution. The Firedrake project tackles this productivity crisis by taking a radically different approach to simulation software creation. Scientists and engineers create simulations by writing the finite element form of the PDE in high level mathematical code, similar to Mathematica or Maple. Firedrake then uses specialised compilers to apply a sequence of mathematical transformations to this code, each one applying some part of the discretisation and performance optimisation pipeline. The result is a system which is both highly productive and which facilitates the application of optimisations which would be intractable to apply by hand. In this talk I will lay out how the Firedrake system works, and show some of its mathematical capabilities.

In recent years, the use of deep neural networks in Reinforcement Learning has allowed significant empirical progress, enabling generic learning algorithms with little domain-specific prior knowledge to solve a wide variety of previously challenging tasks. Examples are reinforcement learning agents that learn to play video games exceeding human-level performance, or beat the world’s strongest players at board games such as Go or Chess. Despite these practical successes, the problem of effective exploration in high-dimensional domains, recognized as one of the key ingredients for more competent and generally applicable AI, remains a great challenge and is an active area of empirical research. In this talk I will introduce basic ideas from Deep Learning and its use in Reinforcement Learning and show some of their applications. I will then zoom in on the exploration problem, and present some of the recent algorithmic approaches to create ‘curious’ reinforcement learning agents.

We will also have prizes for the best speaker and the best poster.

If your abstract for a talk is accepted we will reimburse travel expenses up to £50, with expenses for poster presenters covered subject to availability.

We look forward to seeing you there!

This year the ICL-UCL day is going to be held at UCL on Friday 27th of April. If you are interested in joining us, please sign up here: https://goo.gl/aFEGC7!

Here is some basic info for the day.

It will be a fantastic day full of all kinds of maths from differential geometry to probability theory and mathematical physics. Prepare for fun to be had, horizons to be broadened and free food to be consumed. 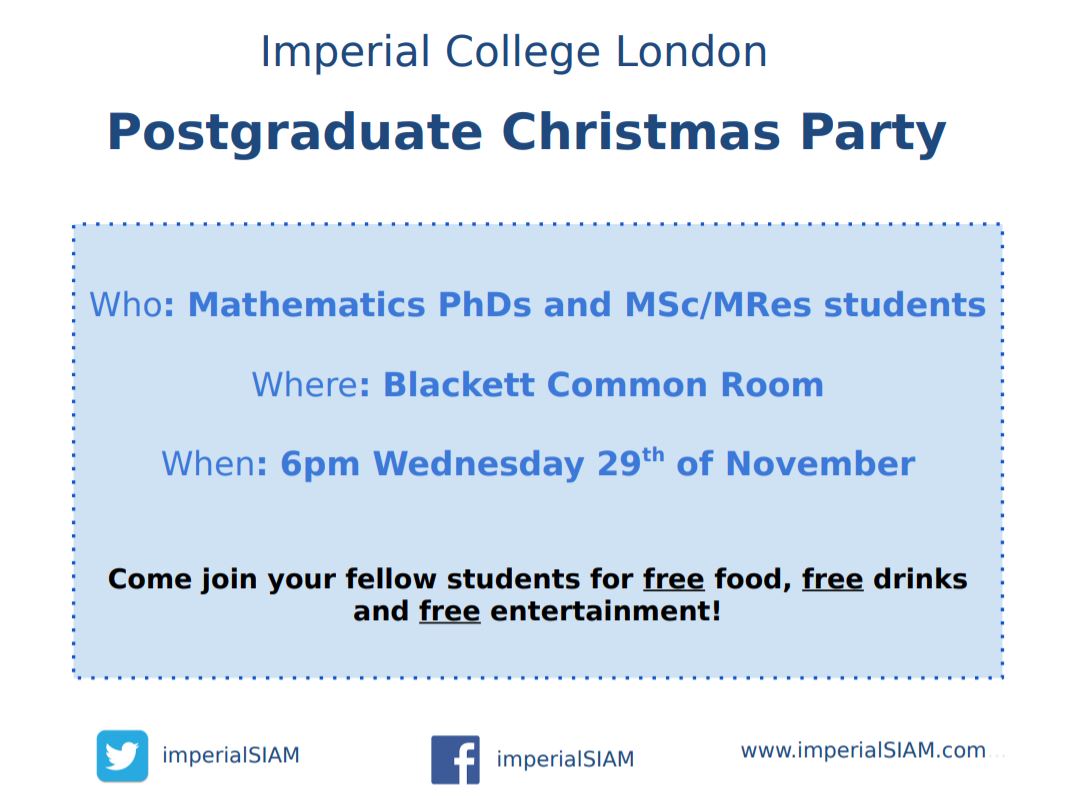 This year, we are hoping to make it really special for you with lots of little surprises!

Keep your diary free on the Wednesday 29th November! Please fill the following form so we know your dietary requirement!
https://docs.google.com/…/1rrXsHuDSjPd8zFb1qt8-oq…/viewform…

Hope all of you can make it!

For the induction week next week, we are organising a series of exciting events to welcome the incoming PhD students to join our big family at Imperial. As usual, all PhD students are invited. Please join us at those events, make some new friends and have fun! 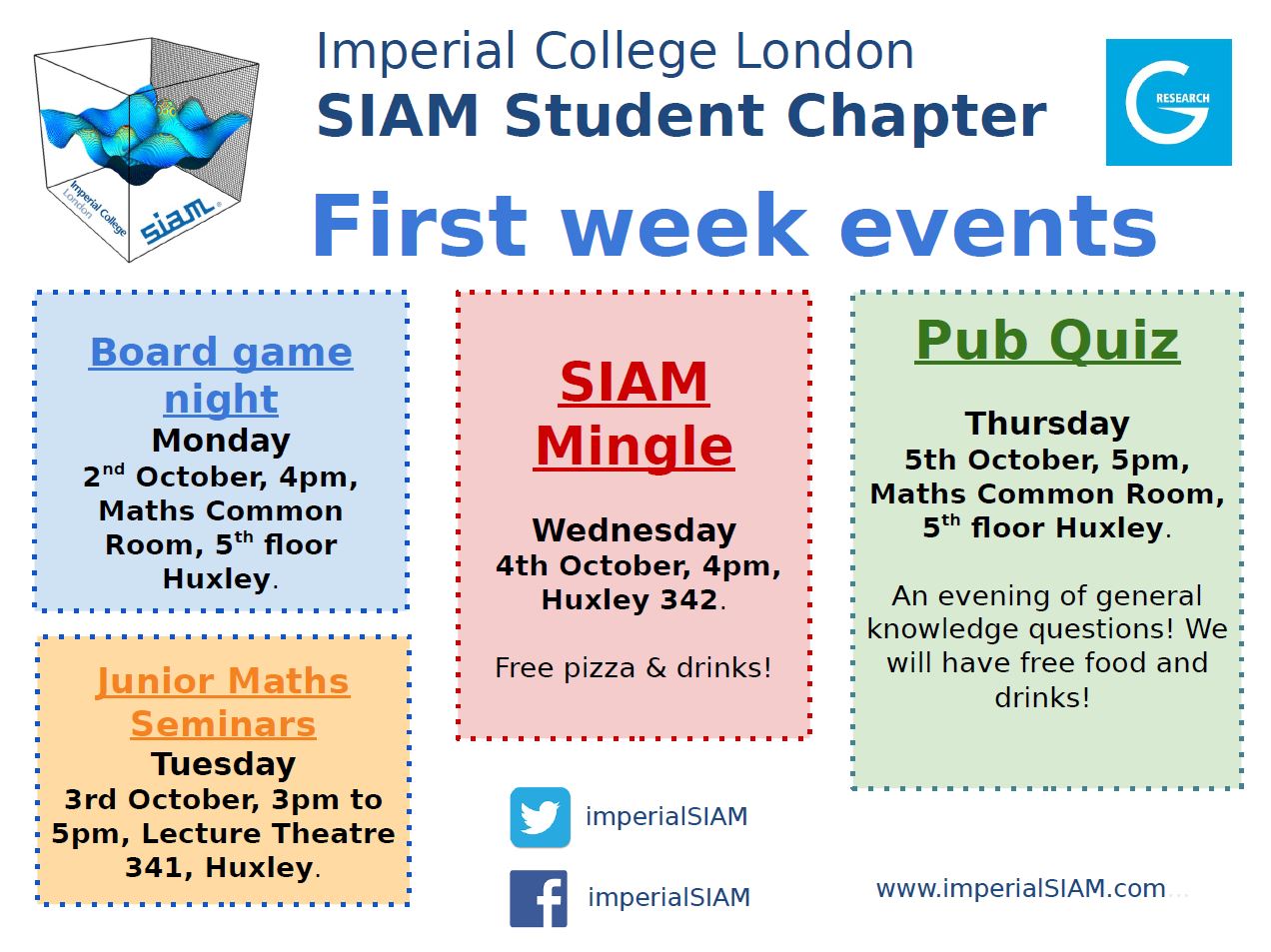 We are delighted to announce the 3rd Annual Conference of the Imperial SIAM Student Chapter. It will be held at Imperial College London on 19th of June.

This is where it takes place (zoom in to see the building, take the elevator to the 5th floor and you will see us).

Please see below for titles and abstracts of the talks.

We have great keynote talks:

Abstract: Compatible finite element methods are numerical discretisation methods based on sequences of finite element spaces that are compatible with the classical vector calculus identities “div-curl = 0”, “curl-grad = 0”. This compatibility turns out to be important for establishing stability of numerical discretisations. I will introduce these methods, review some results from the field (recently expressed in the finite element exterior calculus), and explain how they allow us to build numerical schemes for geophysical fluid dynamics that have long-time stability and conservation properties.

Abstract: Mathematics plays a crucial role in understanding and predicting weather and climate. I will give some examples of this that I have been, and am, involved with, and discuss the general prediction problem.

Abstract: It is trivial to solve a system of constant-coefficients linear ODEs or a variable-coefficients scalar ODE, but how to solve (whether analytically or numerically) a system of linear ODEs with variable coefficients? This talk will take us on a journey across some unexpected themes in mathematics, e.g. Lie groups and algebras, graph theory, graded free algebras and geometric numerical integration, with a smidgen of highly oscillatory quadrature.

These are the contributed talks:

There is *no registration fee* and *free lunch will be provided* on the day for all participants. A financial travel support (up to £50) will be available for all shortlisted speakers or anyone presenting a poster. Please note that this is subject to our limited resources and we will be able to help on a first come first served basis. So don’t miss this opportunity and sign up as soon as possible!

We are also very happy to announce that all poster presenters and speakers will enter a competition and have the opportunity to win:

and receive a £100 voucher gift. The format of the contributed talks will be a 20 minutes talk plus 5 minutes for questions.

So don’t wait any further and sign up using the registration form at:

Please note that registration is closing on the 9th of June and we can’t guarantee to accommodate late registrations. If you missed the deadline but you are still interested, please get in touch with the organisers and we will try to find a solution.

P.S If you’re curious to see some pictures from the previous years, just have a look at the following link:

We are pleased to announce our first ICL-UCL day on April the 3rd, 2017, held this time at Imperial College London. This is the first of what we hope a long series of events where people across different London universities will have to opportunity to get in touch with other students to talk and share their ideas and research in a friendly environment.

We have two great keynote speakers:

We also are looking for 25 min talks contributed by PhD students(4 from each university). There will be a prize for the best junior talk!

There is no registration fee and lunch will be provided, so don’t wait further and sign up soon to enter the competition.

Here is the link for the registration:

To submit an abstract for a talk send us an email at imperialsiam@gmail.com by Sunday 19th March and we will notify of the acceptance shortly after. Please use “Abstract ICL-UCL” as subject of the email.

To register for the conference you have time until Sunday 26th March.

We have organized a movie/pizza night on the 22nd of November. All we need from you is to sign up and vote for your favorite movie using the following form:

We will be in room 340 Huxley starting at 6pm. We are going to have snacks and drinks during the movie and pizza at the end. For that reason, please tell us whether you have any dietary requirements as well.

Please, do sign up trough the form since we need to have an idea of the number of the participants.

Hello! The new committee would like to warmly welcome all new and returning maths PhD students here at Imperial!
We hope you will have a great time and an interesting year ahead of you!

The Imperial SIAM Student Chapter will do its share in this by organising (recurring) events which are going to be announced via email, facebook and twitter.
So don’t forget to check it out!

We hope you settle in well, make use of all the opportunities of Imperial and London, and, of course, attend as many of our events as possible! 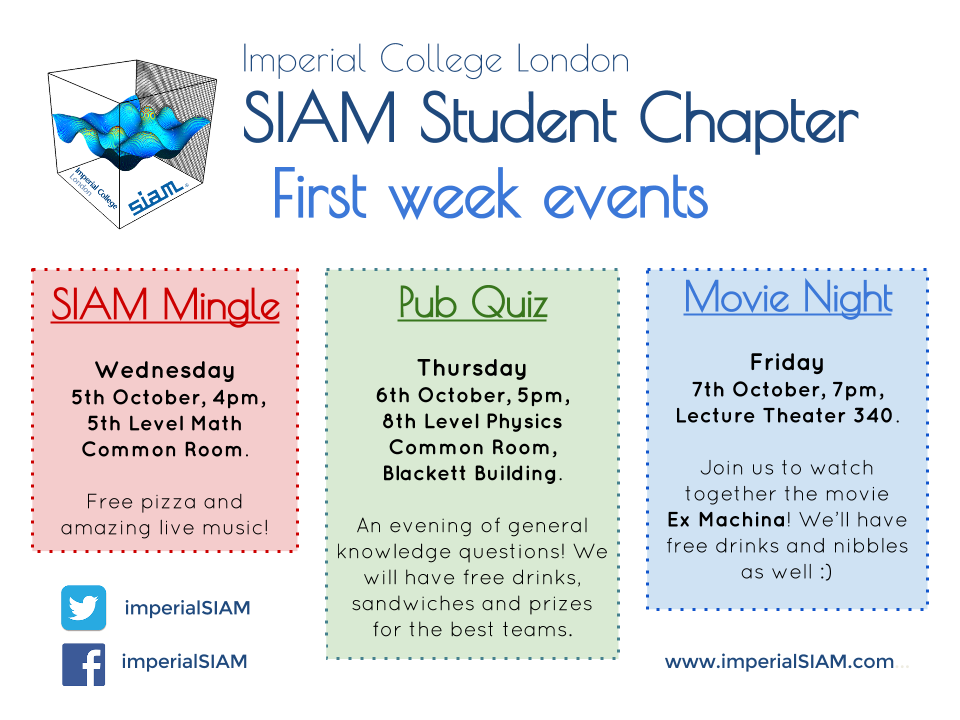 The 2nd Annual Conference of our chapter was well attended and well received with 67 participants, 11 speakers and 3 plenary speakers from across the globe. What a day!!

Congratulations to our prize winners: 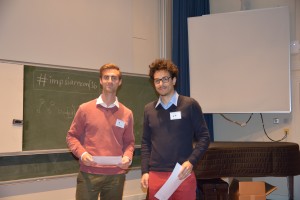 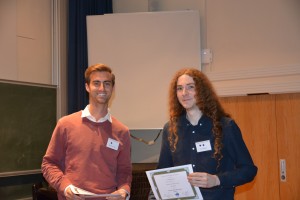 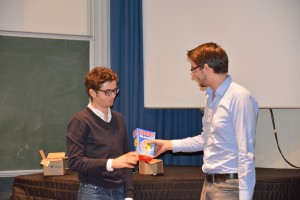 and a big thanks to all our speakers, poster presenters and participants for a great day!!!

Send us an email at:
imperialsiam@gmail.com